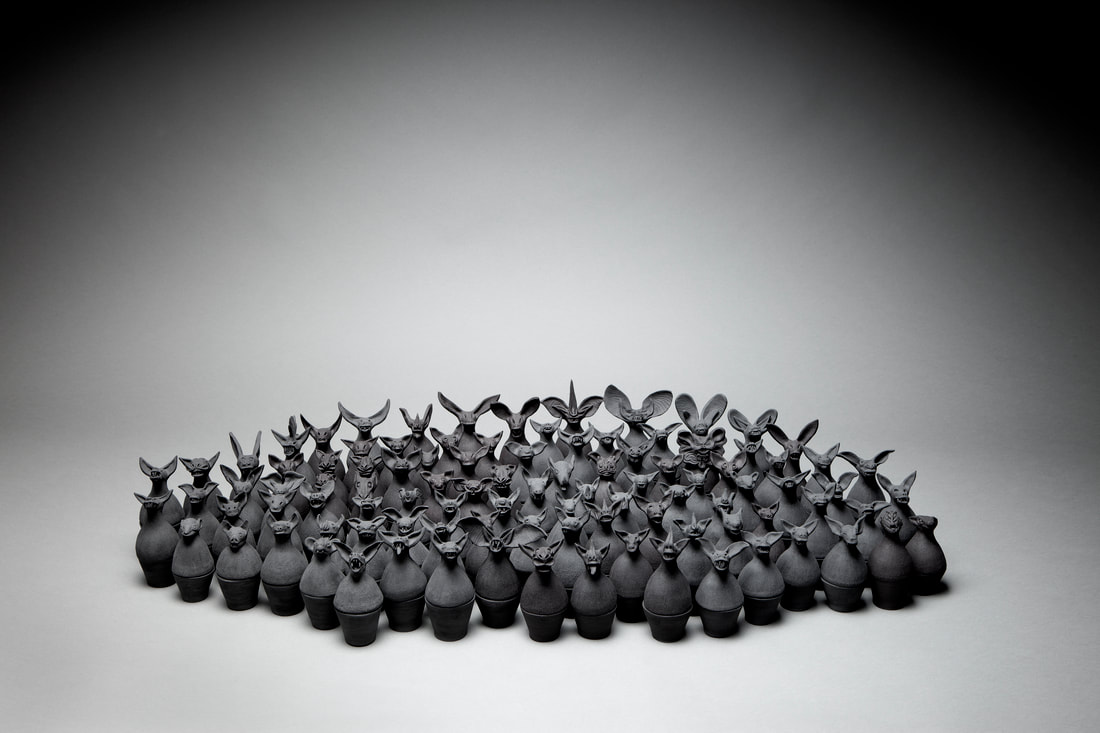 Since completing a Bachelor of Fine Arts with distinction in 2005, I have continued to exhibit in numerous group shows as well as award-based exhibitions. Spook (bat photo above) is from an exhibition held at Zimmerman Gallery in Palmerston North and is a focus on critically endangered bats.
All images photo credit to Richard Wotton 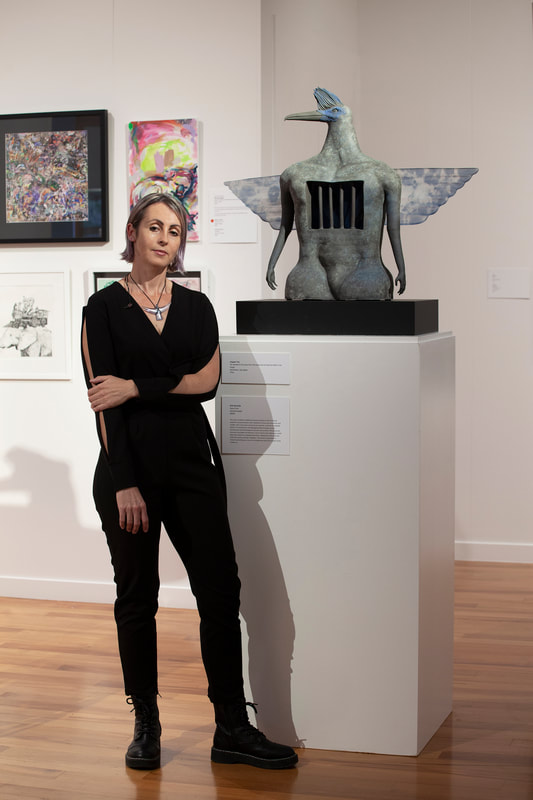 Bittersweet Wish: The Flight of the Genie Birds

​In 1773, on his second voyage to New Zealand, Captain James Cook gave hens to Māori in both the North and South islands. Missionaries in the Bay of Islands were the first recorded poultry farmers in 1814. Many early settlers had a few hens in the backyard to supply eggs. These were the first birds to be introduced to New Zealand; since then, 130 bird species were released in Aotearoa with 41 successfully establishing wild populations. So why were they bought here?
One of the birds chosen by the acclimatization societies to eat up the insects was surprisingly the sweet little Yellowhammer, a coastal English bird introduced between 1860s and 1870s. The Yellowhammers were initially warmly welcomed but soon local farmers started to complain about their appetite for cereal crops, and these complaints seemed to fall on deaf ears until the last shipment that was bought to New Zealand in the 1880s. These birds were never released, but instead sent to Australia. The Yellowhammers that had established here were now labelled a pest and through public pressure, the acclimatization societies were forced to try and get rid of them; but it was too late as they are still widespread across New Zealand today.
The reference to genie shaped bottles in this exhibition looks at a selection of feral introduced birds presently in New Zealand as well as specific exotic birds species with handles attached; these are birds to report to DOC if you spot them in the wild! Species such as the Rainbow Lorikeet, Ring Neck Indian Parakeet and Galahs feature in public bird aviaries and some are kept as exotic pets, but they are unwanted flying about freely in Aotearoa.

In the 1990s Rainbow Lorikeets were illegally released in Auckland by members of the public. The Department of Conservation began eradicating the feral population in 2000, concerned about competition with native honeyeaters and the possible threat to pristine island habitats such as Little Barrier Island. MPI Biosecurity, in partnership with DOC and regional councils, now manages Rainbow Lorikeet under the National Interest Pest Response initiative. The aim of the response is to prevent them from establishing in the wild. Escaped birds are caught using a range of methods including trapping and netting. The captured birds are returned to their owners where they can be identified or sent to commercial aviculturists with secure captive facilities.
​The Rook is also represented with a handle in this collection. It is the only member of the crow family found in New Zealand in modern times, they were introduced by Acclimatisation Societies in 1862-74. Rooks are listed as an Unwanted Organism in New Zealand and are the focus of eradication campaigns by several regional councils. Before their numbers were reduced, they were a serious problem to germinating arable crops such as maize, sweet corn, cereals, pumpkins, peas (both at planting and maturing), and apples. Rooks can also damage pasture by opening it up to thistles and other weeds while looking for grass grub.
These bird bottles with handles could establish uncontrollable wild populations that compete with our own native birds for food, nesting spots and territory as well as inhibit agricultural production. It will be like letting the genie out of a bottle, flying in all directions we may not wish it to be! The mistakes of our past can alter our future in ways we don’t wish it to be. 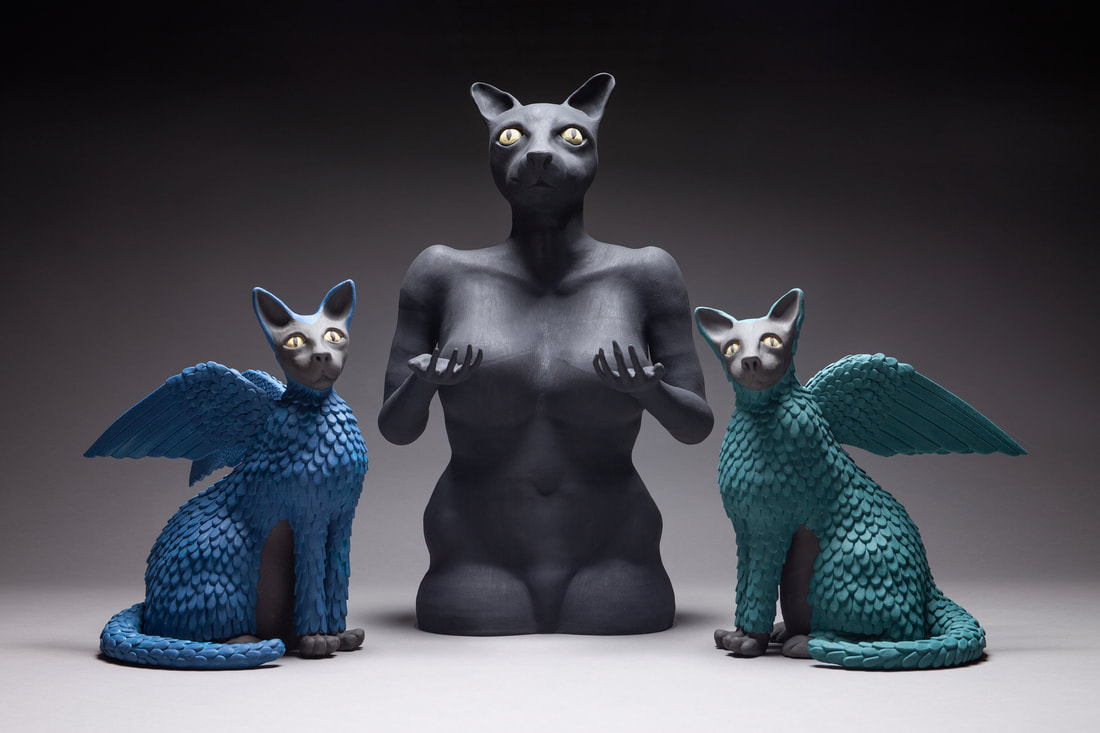 Chaos (blue cat) and Harmony (green cat) available at Zimmerman Gallery
She does not know how but they found her
​Stoneware sculpture
2020/2021
ANGELA TIER ART ©COPYRIGHT 2020.  ALL RIGHTS RESERVED
​Website designed, developed and hosted by Wright Way Design