The Archaeologist | The Alchemist | The Believer 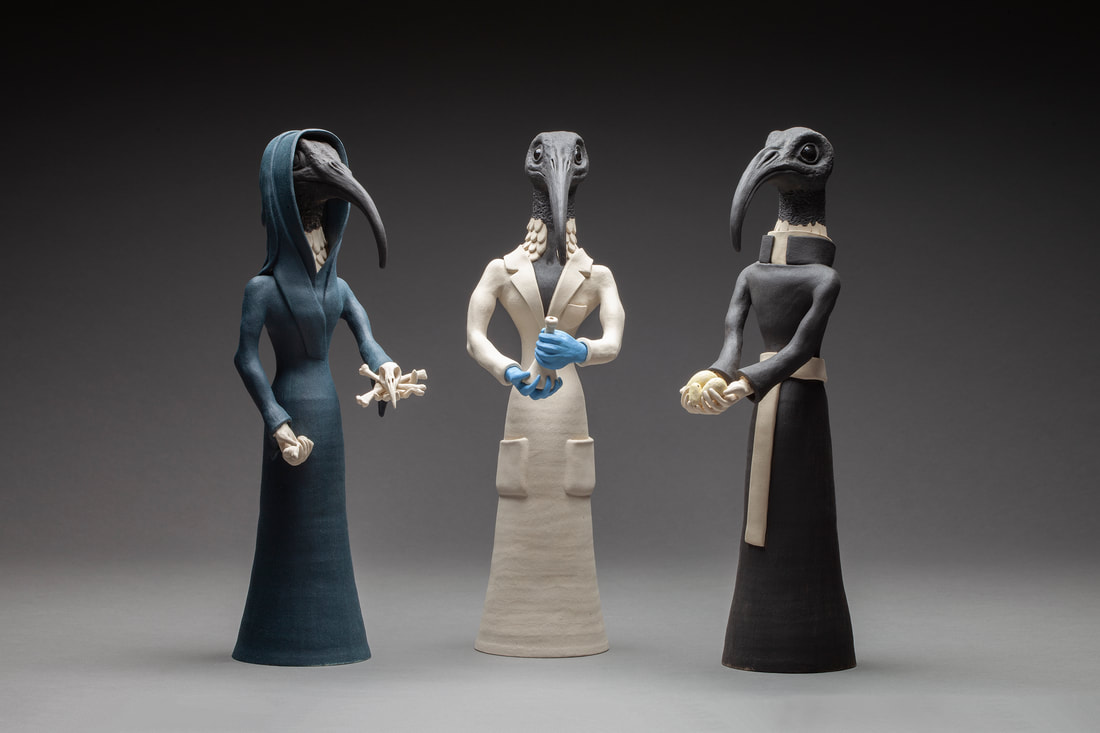 ​They are unsure of the consequences as they each bring their element to create a resurrection together; resembling Dr Frankenstein who collected parts to reignite life into the bones and flesh of his creature. Will it be wonderful, or will it be disastrous? Time can only tell us what will unfold as nature and de-extinction come together in our not too distant future. 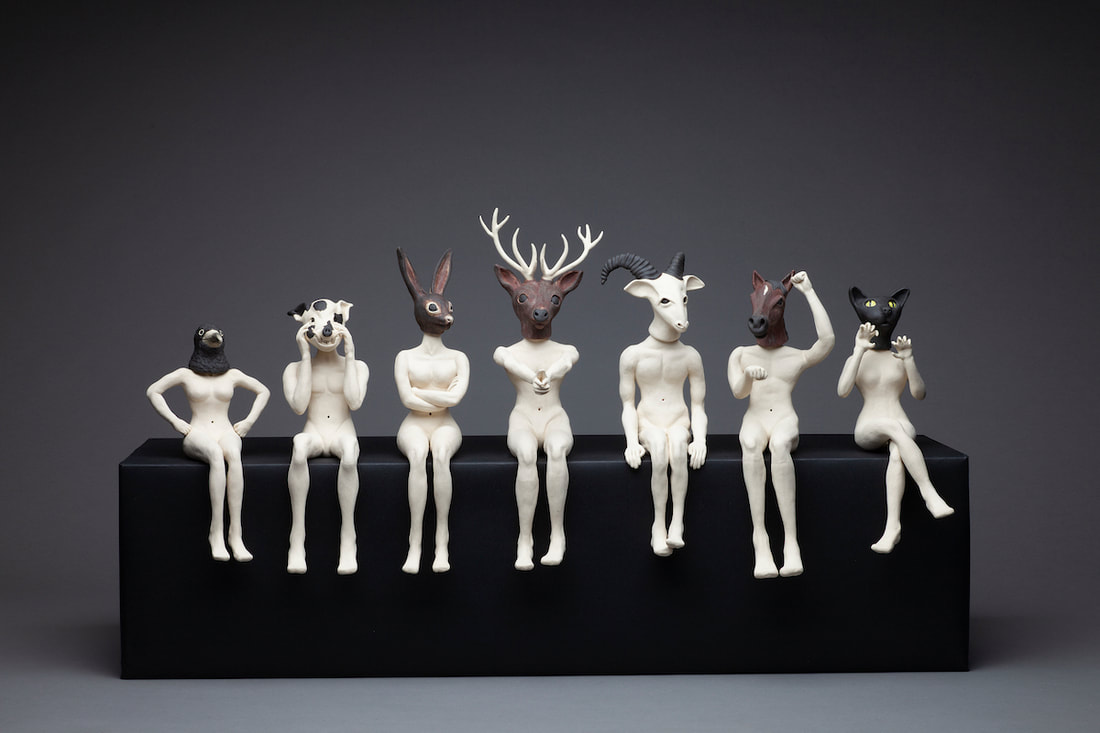 Who really are the pests?
​
Before humans arrived in New Zealand there were no large land predators or major threats to our thriving bird life here or our eco system. New Zealand was an abundant native bush paradise.

First to arrive were the Kiore (Polynesian Rats) and mice, arriving by boat with the first humans around 1280 A.D. They feasted on plants, insects, lizards, frogs and birds. They spread fast and started to have a significant impact on the ecology of New Zealand.

Next to arrive also by ship in 1769, were cats. Sailors kept cats on board to control the rat population, but half a century later they had established a feral cat population on land and began to feast on New Zealand wildlife (as well as a few of those pesky Kiore too).

Rabbits were also common on ships, a good source of meat while out at sea and it is known that they were set free on islands as food for castaways. They were still imported to New Zealand up until the 1860s to create a domestic meat and fur trade. Rabbits took longer to establish as a pest, but once farming had helped create a suitable habitat for the rabbit to thrive, the spread and growth in numbers soon became unmanageable in as little as 20 years.

Possums were also bought here in 1837 by some European settlers who thought it would be a good idea to establish an alternative fur trade. The first possums did not survive but they kept trying, and two decades later they succeeded. Unfortunately, these people had no idea the massive impact these furry critters would have on our environment. In 1921 the Government made it illegal to bring anymore possums to New Zealand, and they were declared a pest by 1946. There are an estimated 30 million possums across Aotearoa today.

​The European settlers introduced many species of plants and animals. They had needs for working and farm animals, plants to establish crops and gardens, a desire for hunting sports and game as well as a longing to hear the sweet familiarity of bird song from home. “Since Europeans arrived, there have been 130 species of bird (33 survive), 51 of mammal (28 survive), an estimated 30 of fish (23 survive), 40 of worm, 60 of spiders and mites, 12 of slugs and snails, 1100 insects and 1700 plants introduced. A further four species of bird and one fish have become extinct, while many others are endangered and only persist in small numbers on offshore islands. A total number of extinctions of native animals other than birds or fish will never be known, but includes insects, snails, reptiles and amphibians.” (https://collections.tepapa.govt.nz/topic/2849)

We can no longer hide behind these masks or argue over poison. The time has come to acknowledge that we are the pests too! 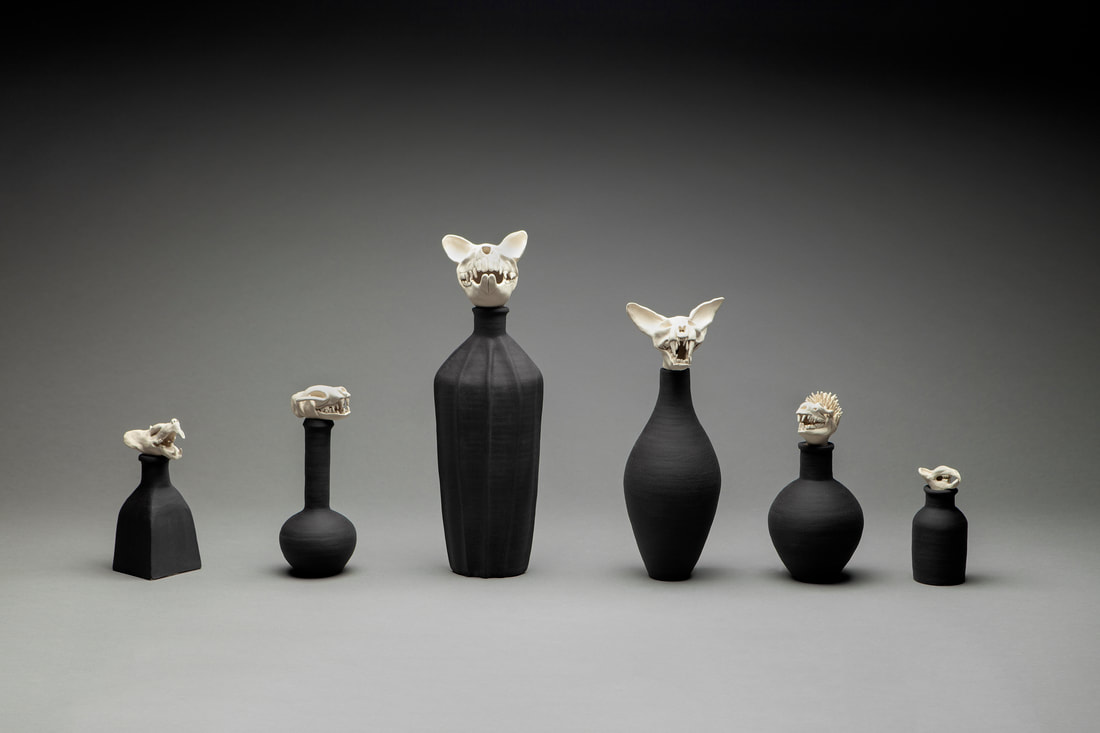 You might be scared if you saw a colony or cloud of bats pass overhead. You may think of blood-thirsty vampires, or even rabies!  What you probably don’t realise is that we humans are reliant on them for survival, just as much as we are dependent on honeybees!

This installation is made up of four looming, apocalyptic bats and one hundred numbered bat urns. Some are styled after bat species and some are imaginary and playful, but also to represent those yet undiscovered. The colony is a grave image of endangerment and a chance for people to reflect on the impact we have on our environment and to consider those which we may fear, or allow to slip from our thoughts, as being vital to our continued existence. 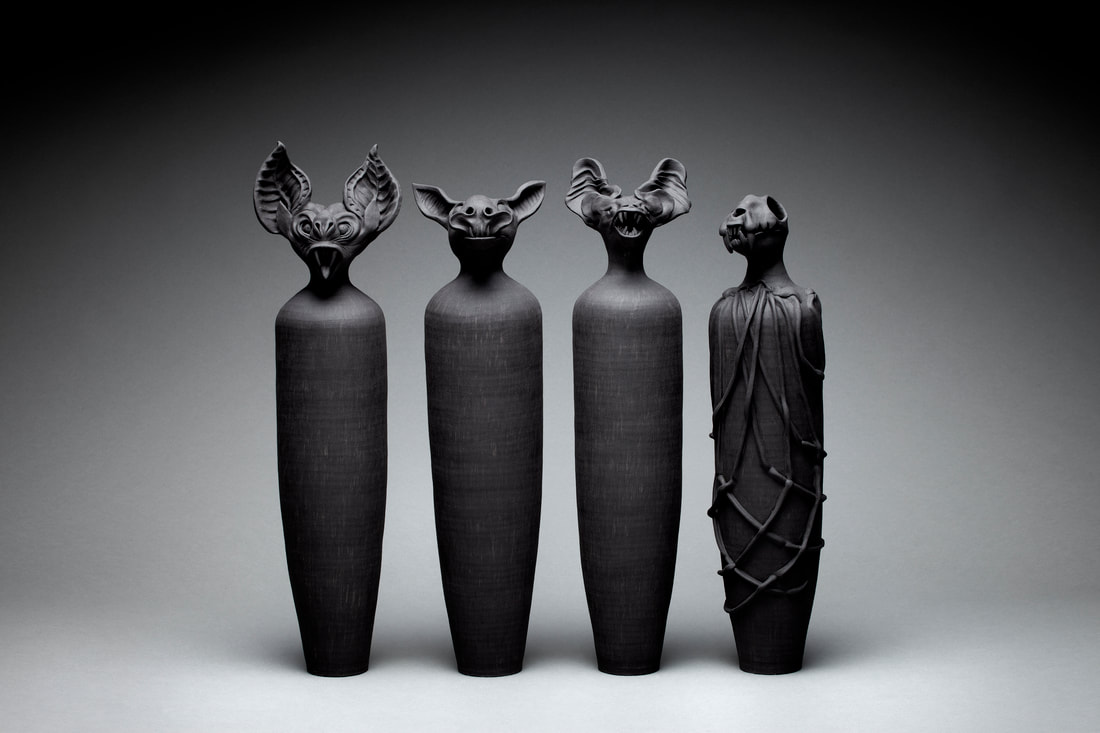 Moa, one of the most iconic extinct flightless birds of New Zealand that was hunted to extinction many moons ago. Birds endemic to New Zealand have thrived for millions of years, but it only takes a few centuries of human activity to have such an impact on the environment that we unfortunately lose them forever.

There have been many conversations about de-extinction or the reviving of extinct animals such as the Moa by scientists, including an article by popular magazine the National Geographic, that ask us to consider how we would feel about the possibility of this phenomenon. Urns in ancient Egyptian tombs are vessels used to aid the transportation of the dead to the afterlife, but this urn is a vessel for loss and signifies that ashes to ashes and dust to dust are absolute; that the Moa has been laid to rest and there it shall remain. Their bones housed in museum collections are there for us to remember, so let the loss of these birds and other extinct animals be a lesson, a guide, a sacrifice to teach us, haunt us and signify change.

We may be on the brink of de-extinction but that is a dangerous concept.  ​The prevention of such tragedies should be the focus of humanity and not reanimation of the deceased.

National birds are often carefully selected because they represent something notable about the country itself.  They may be part of the nation's history or culture, an endemic species found nowhere else, or representative of qualities the nation values - such a strength, bravery and elegance.  Some birds are selected for their stunning beauty, or melodious voices.  Still, others may be ritualistic generalizations of birds rather than individual species.

In this installation, I used national birds from each country at the 43rd G7 Summit, along with outsider Vladimir Putin, to represent world leaders. 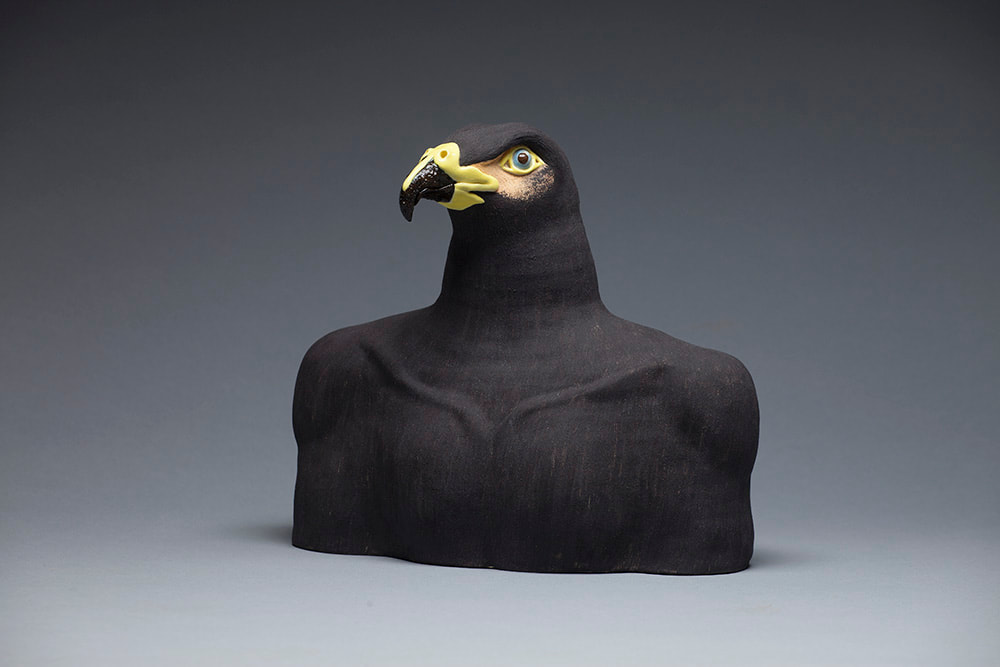 The crow and dove collection is reflective of the shifting balance between times of peace and anarchy. The inspiration was drawn from the cage raised peace doves that the Pope had released annually; these unsuspecting birds were being targeted and attacked by intelligent lurking crows who had remembered where to find easy prey . 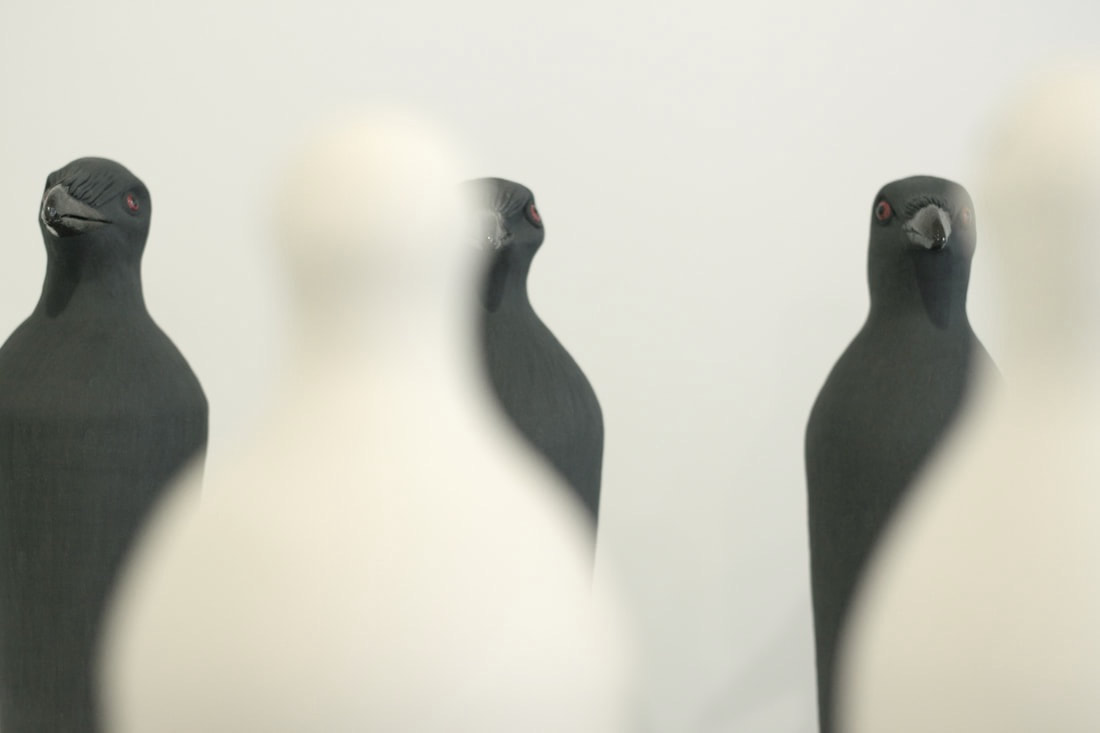 A series of urns that represent some of the commonly known 20th century extinct birds of New Zealand.
​Birds endemic to New Zealand have thrived for millions of years, but it only takes a few centuries of human activity to have such an impact on the environment that unfortunately, we risk losing them forever.

On a Wing and a Prayer

On a Wing and A Prayer is a collection of coiled bird urns that open up conversations about mass extinction with a focus on our own
critically endangered New Zealand birds. 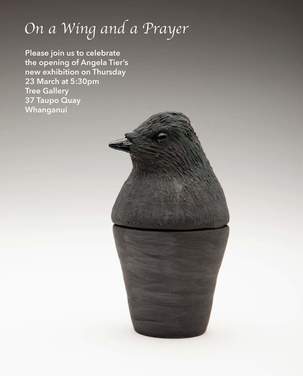