ANGELA TIER ART
On a Wing and a Prayer
Coiled Bird Urns,  2017 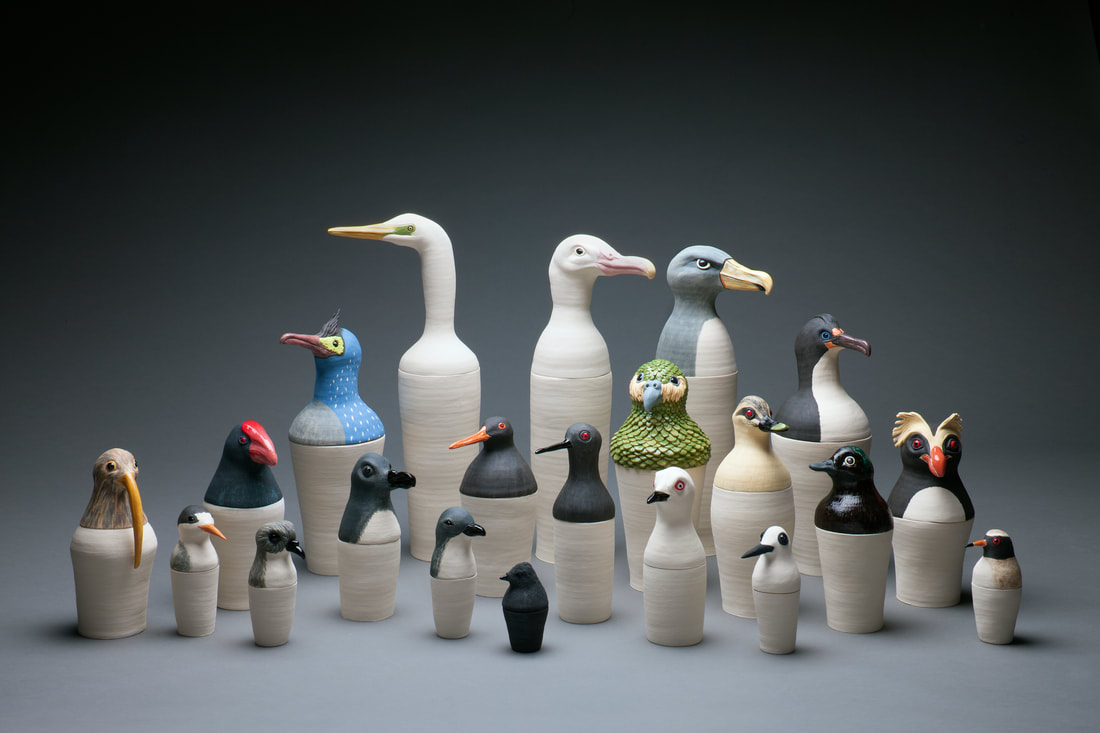 On a Wing and A Prayer is a collection that open up conversations about mass extinction with a focus on our own critically endangered New Zealand birds.
The collection of twenty one bird urns focuses on the listed 2017 critically endangered New Zealand birds. The visual link between the funerary urn shape and the dire connection that these birds are so close to extinction, is vital for the viewer to understand the message of urgency.
Birds are very important to New Zealand’s national identity; apart from the Pekapeka (bat) our only native mammal, they were the only inhabitants of Aotearoa until humans arrived. Many species of birds, and certain species of Pekapeka have since become extinct due to pests, deforestation and hunting. Losing birds is something we mourn as a nation, in particular the extinct Huia, Laughing Owl, Bush Wren and Moa. These tragic losses have forced us to reflect on how we could avoid such occurrences in our present time and future by making more responsible efforts to preserve our native flora and fauna.
The bird urns portrays an important message of preservation. The familiar shape that is reminiscent of the Egyptian Canopic jars and their relationship to the afterlife is a visual communication clue that speaks without words, an important way of understanding the message of endangerment while eliminating written or verbal language barriers.
​
Viewers will recognise many of the native birds in this collection, such as the Kakapo, Takahe, Black Robin, Fairy Tern or Kaki and they might not have known how close we are to losing them; seeing these bird urns may encourage them to look information up on their phones and perhaps donate to a cause in effort to save these native species.
Education around preservation is key, understanding the plight of these bird species will be the best chance for their continued survival. Visit the Department of Conservation website https://www.doc.govt.nz/ as well as http://www.nzbirdsonline.org.nz/ for information on our native birds and how you can help preserve them for generations to come.
ANGELA TIER ART ©COPYRIGHT 2020.  ALL RIGHTS RESERVED
​Website designed, developed and hosted by Wright Way Design